Applications for the Art Works II grants were submitted to the Arts Endowment last summer and reflected the wide range of performances, exhibitions, and activities that the agency has traditionally funded. At the end of March 2020, the listed projects were approved, followed by two months of extensive technical assistance in which NEA agency staff worked one-on-one with hundreds of organizations to adjust their projects to meet the new reality created by the pandemic. Changes include postponing activities until the museum reopens and taking some activities virtual.

In the popular Friends of Sheldon Jackson Museum-sponsored Native Artist Residency Program, artists from around the state fill residencies at the museum, during which time they study the collections and share their work with the public through artist lectures, hands-on workshops, and demonstrations.

This year's residency program will include a virtual public talk by Abel Ryan entitled "Stopping and Restarting, What My Journey Through the Covid 19 Shutdown" on Thursday, July 2nd at 3pm; a public, virtual painting class on formline design with Abel Ryan on Saturday, July 11th at 2pm; a 1 hour virtual Residency Recap Talk by Abel Ryan on Thursday, July 16th at 3pm ; a two-part virtual earring making class using porcupine quills and deer/moose hide or fish skin with June Pardue on Sat., July 25th and Tuesday, July 28th from 2-3:30pm (both days); a virtual public talk on Salmon leather by June Pardue on Sat., Aug. 1st at 3pm; a public 1 hour virtual Residency Recap Talk by June Pardue on Saturday, August 8th at 3pm ; an intensive model kayak building workshop with Alfred Naumoff (dates, time to be set); a public talk on Cultural Identity Through Fabric by Pam Johnson (date, time and format to be set); and a child's vest regalia making workshop with Pam Johnson (date, time and format to be set).

Demonstrator video clips are downloadable MP4 files, which can be viewed on most video players.

About the Native Artist Residency

Since 1988, summer visitors to the Museum have enjoyed the opportunity to observe and visit with Alaska Native artists at work. From mid-May to mid-September, artists representing cultures across Alaska come to Sitka to demonstrate their art for residents as well as for travelers from outside of the state. 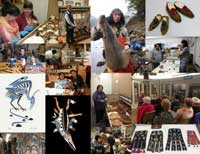 The program started with Janice Criswell, a Tlingit weaver from Juneau, who volunteered a few hours over several days to demonstrate her art for visitors. In its early years, the program remained small, with just a few artists participating each summer. In 1996, when the Friends of the Sheldon Jackson Museum received an $11,000 grant from the National Endowment for the Arts to include artists from other regions of the state, the demonstrators program took a leap in scale. Since that time the Friends have received other grants from the NEA, as well as from the Alaska State Council on the Arts and the Lila Wallace Reader's Digest Foundation, enabling the program to attract artists from throughout the state.

The Friends were awarded a $20,000 grant from NEA to support the program in 2009 and 2010. The Friends brought to Sitka artists representing Athabascan, Inupiaq, Yup'ik and Aleut/Alutiiq cultures. Local Tlingit have taken part in the popular program as well.

The artists come to Sitka to teach, but some of them also come to the Museum to study the Sheldon Jackson collection and learn more about the traditional methods and materials used by earlier artisans. In 2002, an Athabascan elder helped museum staff repair a century-old birch bark canoe as part of the demonstrators program. Cleaning, stabilizing and adding a new prow to the craft all took place in the museum gallery. More about the canoe project.

The Museum houses nearly 5,500 artifacts from all of Alaska's major cultural groups. Most of the pieces were collected by the Rev. Dr. Sheldon Jackson, the Museum's founder, over a century ago. One of Jackson's goals in establishing the Museum was to help future generations of Alaska Natives learn how their forebears lived.

The Friends of the Sheldon Jackson Museum, who raise funds locally and pursue grants from national sources, support the demonstrators program. For example, the 2002 season was the second year of a 2-year grant from the Alaska State Council on the Arts. World Explorer Cruises, for a second year, funded one out of town artist. Fundraising is ongoing and donations are accepted any time at the Friends' Museum Shop.

For many years, the Museum has had a partnership with the Southeast Alaska Fine Arts Camp; both entities contribute funding for the program and they share at least one artist each season. Charles Pullock, Inupiaq ivory carver, has filled this position over several summers.

The Museum uses the artist demonstrators program to link historic and contemporary Native culture for visitors. The opportunity to watch and speak with Native artists is, for many visitors, a highlight of their trip north. The demonstrators also help Alaska residents learn more about the culture and history of Alaskan Natives.

"The program opened up ways of living not known before," one Museum visitor wrote recently. "The artist was warm, patient and tied me to his culture." "The artist spoke with us of personal stories and history."