In March 1927, a middle school student at the Jessie Lee Mission Home in Seward received a telegram that left him pale and speechless: he was the winner of a territory-wide contest to design a flag for Alaska. Benny Benson's simple design, featuring the Big Dipper constellation against a dark blue background, would soon be flying on poles from Ketchikan to Barrow.

The inspiring story of Benson and his flag is told in Eight Stars of Gold: The Story of Alaska's Flag, an exhibition commemorating the Alaska's flag, was organized by the Alaska State Museum in Juneau.

The exhibition and catalog delves into the story behind the flag contest. In 1926 Territorial Governor George A. Parks visited the U.S. Postal Service building in Washington, D.C. Flags from other states and territories waved in the breeze, but Alaska was not represented because the territory had no official flag. This inspired Parks to arrange a flag design contest sponsored by the Alaska branch of the American Legion for all Alaska schoolchildren in grades 7-12. Students submitted a total of 142 entries.

The exhibition consists of replications of Benson's winning design as well as 22 other designs submitted by Alaska students and 7 interpretive text panels. Online educational materials that complement the traveling exhibition are available through at the State Museum's Eights Stars of Gold website. 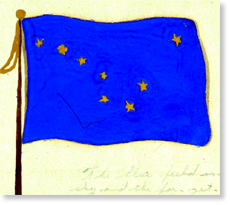