Traveling Exhibit Creating Alaska: The Origins of the 49th State

Fifty years ago, on Nov. 8, 1955, fifty-five Alaskans sat down to draft the future of Alaska. The delegates to Alaska’s Constitutional Convention took on the task of writing a constitution for a state that did not yet exist. They had 75 days to complete their work. Alaskans quickly approved the constitution, a clear sign to the nation that Alaskans were ready to join the Union. When statehood came in 1959, the document written at Constitution Hall at UAF became the foundation of our state government. Since then, it has been hailed by impartial observers as a model constitution for its brevity, flexibility and protection of individual rights.

As host of the Constitutional Convention, the University of Alaska has a special interest in preserving the history of this event. In February 2004, the University launched Creating Alaska, a project to gather, preserve and promote public understanding of Alaska’s constitutional history, through collection of oral histories, archiving of historical artifacts and development of public education efforts.

The Creating Alaska exhibition has been touring the state since November 2005. 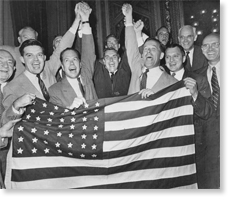 Two new light weight versions of the exhibit have been produced: